This Is My Chrysler: 1957 Dual Ghia # 137. In the early 1950s, Chrysler designer Virgil Exner had created a series of striking “Firearrow” concept cars crafted by Italian coachbuilder Ghia. Eugene Casaroll –who owned Dual Motors Corporation –bought the rights to the Firearrow design. By 1956, Casaroll’s first car, the Dual-Ghia, was in production. Casaroll built about 100 Dual-Ghias through 1958, at a price of $7646. The attraction of the Dual-Ghia was the successful mating of a superbly styled and executed Ghia Italian body with Chrysler Corporation running gear. 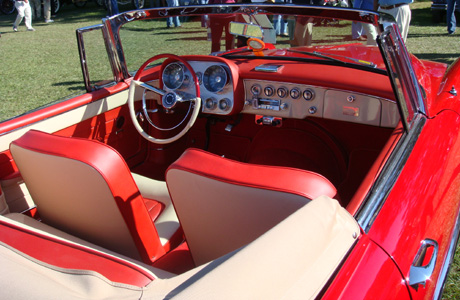 The automotive press lavished it with praise. It became known as the “car of the stars” owned by such celebrities as Frank Sinatra, Peter Lawford, Eddie Fisher and Debbie Reynolds, Richard Nixon, Desi Arnaz, musicians Hoagy Carmichael, David Rose, and other such “well knowns” as Sterling Hayden as well as actress Natalie Trundy and tennis star Gussie Moran. Reportedly, Ronald Regan owned one, which he lost in a high-stakes poker game with then-President Lyndon Johnson. 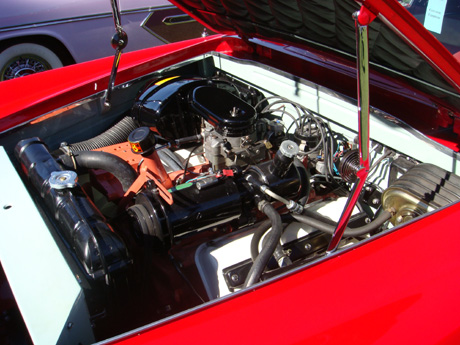 Performance was excellent, due to many of the cars, including #137, being powered by the High Performance, Dodge Hemi D-500, a 315 V-8. Out of the cars produced, only 32 still existed as of July 2006. Over 1,500 man-hours were said to have been lavished on each car before it left the factory. This car is number 137. The vehicle identification numbering series started with 101. This car was originally a demonstrator for Chrysler Dealer, Sanders Motors of Long Island, NY. The Pomerantz family of Great Neck, Long Island NY, purchased it. Traded in 1962 when #137 was slightly used with only 42,000 miles. It was driven for a short period of time and basically was put into storage for the next 32 years, mostly in a barn in Greenwich, CT.