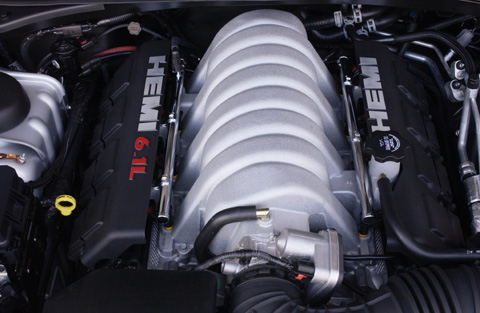 The Chrysler 300C SRT8’s 425-horsepower, normally aspirated 6.1-liter HEMI has the highest output for its size of any naturally aspirated V-8 engine ever offered by the Chrysler Group. Its 69.8 horsepower-per-liter rating exceeds even that of the legendary 1966 “Street HEMI.” Torque is rated at 420 lb.-ft.

Although the Chrysler HEMI was born in the 1950s and entered into legend in the 1960s and ’70s, today’s version took much of its inspiration from the original-particularly the namesake hemispherical combustion chambers that provide power and efficiency.

When SRT powertrain engineers set out to develop a more powerful HEMI for the Chrysler 300C SRT8, they were mindful of the engine’s heritage, which led to adopting traditional HEMI engine cues including an orange-painted cylinder block and black valve covers.

For more displacement, SRT engineers bored out the diameter of the cylinders in the HEMI by 3.5 millimeters each in order to increase the total displacement to 6.1 liters from 5.7 liters. Compression ratio was also increased to 10.3:1 from 9.6:1, increasing engine efficiency and power.

Engine breathing was increased with new higher-flow cylinder heads, a specially designed intake manifold, and exhaust headers with individual tubes encased in a stainless steel shell, all unique to the 6.1-liter HEMI engine. Larger-diameter valves and reshaped ports in the heads allow for maximized air flow. The intake manifold was designed with larger-diameter and shorter runners for higher-speed tuning. Exhaust is routed through a large-diameter (2.75-inch vs. 2.5-inch) exhaust system with 3.5-inch chrome tips.

To further increase horsepower, performance-oriented camshaft profiles were developed to allow more air in and out of the cylinders, as well as manage a higher engine speed. SRT engineers increased the HEMI’s peak power output engine speed by nearly 20 percent to 6,000 revolutions per minute (rpm) from 5,000 rpm. Intake and exhaust valve stems are hollow, and the exhaust valve stems are filled with sodium to help dissipate heat more efficiently.

Power for the SRT 6.1-liter HEMI is channeled through a five-speed automatic transmission with specially calibrated driver-selectable AutoStick, which offers fully automatic or manual shifting selection. A heavy-duty four-flange prop shaft sends the torque from the transmission to an upgraded differential and axles.