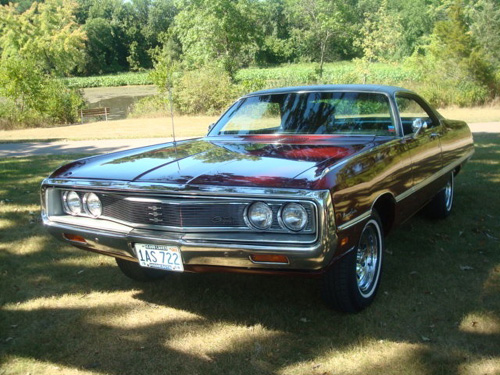 This Is My Chrysler: My 1969 Chrysler Newport Custom 2dr HT was purchased new by my grandparents in November of 1968. I actually watched as it was unloaded off the transport truck and driven into the service bay at Linnes Weiler Chrysler Plymouth in Albert Lea, MN. They traded it 1984 for a new Reliant wagon. I came across the car in November 1991 and bought it. The original window sticker and original registration document bearing my grandfather’s signature were still in the glove box. The build sheet was still under the back seat and in perfect condition. I also was able to locate the original issue license plate, it is displayed on the front of the car. I drove it home on May 16, 1992. The paint is original as is the vinyl top. I did have to have the front seat reupholstered. The upholstery shop found NOS material in Ohio, just enough to complete the job. The original 383 2bb engine was rebuilt to factory spec in 2001. I personalized it with American Racing’s Tailgunner wheels as well as dual exhaust (Flowmaster Mufflers) also in 2001.